Days four and five were full of wonderful surprises and a few disappointments, but overall, it may be the best two days at the festival this year.

Montparnasse Bienvenue (Jeune Femme) is an impressive directorial debut from Léonor Serraille, but it is Laetitia Dosch’s performance that elevates this to a festival highlight. Dosch’s completely inhabits Paula Simonian; broke and homeless, she wanders aimlessly around Paris in search of work, a place to live and people to care for her. It’s a character portrait that has been done before — the neurotic young adult searching for purpose — but Serraille’s empathetic direction and Dosch’s authenticity make Montparnasse stand out from the rest.

Ingrid Goest West may not feel like a traditional festival film, but it was the perfect in-between film. It goes head-on at the social media generation, with satire and humility. It crosses into generalizations at times, but when they are as acute as Instagram posts of avocado toast, that is as inoffensive and hilarious as generalizations come. Aubrey Plaza shines as Ingrid, with her trademark social awkwardness and a new-found aspirational social identity. She’s a hilariously tragic character, and Plaza plays her to perfection. Elizabeth Olsen is as good as ever and does for Ingrid Goest West what Emma Watson did for The Bling Ring — which has gone unrecognized in both scenarios. It may fall in between the cracks of names like Claire Denis, Luca Guadagnino, Michael Haneke and François Ozon, but it’s easy to recommend to anyone as it’s just a good time at the theatre.

The same can be said for Good Time. It is a kinetic blast from the past, that solidifies the Safdie-brothers’ position in contemporary American cinema. As someone who wasn’t too enamored by Heaven Knows What, this was a nice surprise. The Safdies’ heavy aestheticisation is much more at home in Good Time, as the neon colors and dirty close-ups are complimented by every facet of the film. From the 70ths synths that erupt from the speakers to the energetic direction that never stops. The music is anxiety-ridden and raw; it heightens the extremes of the film and is without a doubt one to listen to when the credits have rolled.

Indonesian director Mouly Surya’s previous film, What They Don’t Talk About When They Talk About Love was one of my highlights at TIFF (Tromsø) in 2013, so needless to say I was very excited to see her latest, Marlina the Murderer in Four Acts. A wildly different beast than her previous film, Marlina proves that Surya is one to watch in the future — no matter the genre. As someone who’s always hesitant when it comes to rape-revenge films (or stories in general), it was a delight to see how well-handled it was here. Surya’s approach is not only one of empowerment and empathy, but also an honest psychological confession. She manages to create moments of transcendent beauty, in which womanhood is allowed to blossom. She manages to draw small side-characters that grow and evolve in a natural and humanistic way, and she does this with a minimal run-time. Marlina has been compared to Quentin Tarantino, but it’s an insult to do so. While Tarantino’s films have their values, few of them lie in the women characters he creates, but Surya’s women are ones that will stick with me for a while. Marlina has been compared to the magic surrealism of Alejandro Jodorowsky, which is more applicable but still a shallow comparison. With Marlina, Surya has made sure that we’ll draw comparisons to her in the future because this is a special, one-of-a-kind work of art. 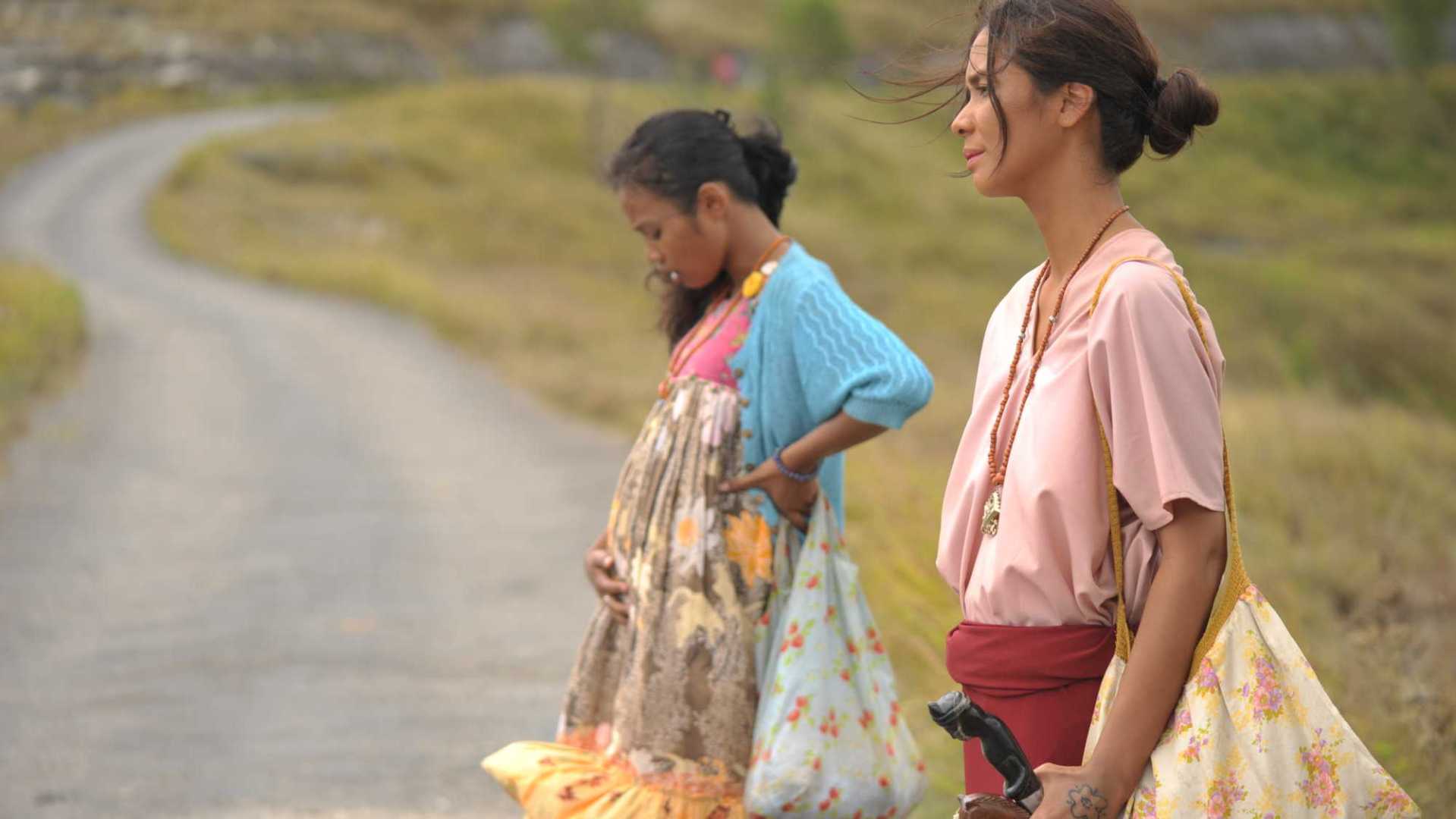 DAY FIVE, also known as the best day, started with Men Don’t Cry. In many ways reminiscent of the documentary The Work, Men Don’t Cry is a film that examines the impacts of war. Not through ruined cities or broken bodies, but through psychological traumas. Set in a Serbian hotel, 20 years after the Yugoslav wars, Men Don’t Cry follows an amalgam of soldiers from different sides and armies, as they try to bury the war in the past and heal their wounds. It’s an ensemble film where almost every story and character we meet is as valuable as the last, and its wholly unsentimental approach is a breath of fresh air at a program that has been littered with it.

Next up was Luca Guadagnino’s Call Me by Your Name, which was THE film I was most excited about at the festival this year. With films like I am Love and A Bigger Splash, Guadagnino has become one of the most virtuosic and inspired audiovisual voices in contemporary cinema. Call Me by Your Name is no exception. All his sensibilities are present; the vitalized colors, the complementary music, the bombastic moments of enamourment. It’s as euphoric as A Bigger Splash and as epic as I am Love, and to see Guadagnino’s auteurisms take root and blossom in a delicate love story becomes an ethereal sensual experience. Armie Hammer and Timothée Chalamet are wonders to behold. The chemistry between them is as palpable and infectious as the unhinged charm of Ralph Fiennes in A Bigger Splash, or Tilda Swinton’s grandiloquence in I am Love. It’s a love story between two men that never fall into the trappings of sentimentality or clichés, which is not only joyous, but also important and necessary.

God’s Own Country is one that leans a bit too heavily on sentimentality for my tastes, but this doesn’t take away from the films absurd brilliance. There is much more going on beneath the surface of this one. Mainly how the wonderfully captured countrysides work to accentuate the intimacy of the two men. The moments of rare emotional connection as a hand touches another; when they sit silently beside one another; when they talk in bed in the morning. It’s quiet moments like these that elevate God’s Own Country to a great one, and the performances by Josh O’Connor and Alec Secareanu are ones that need to be recognized.

Next up was Ava, and the immediacy with which this directorial debut hit me was extraordinary. Ava is a film that utilizes the medium to its fullest extent. Léa Mysius’ assured sensibilities are unmistakable in every facet of the film. The gorgeous 35-mm doesn’t just make it the most aesthetically pleasing experience at the festival, it also accentuates the entire idea and identity of the film. It’s a sensory explosion about sensory loss, where colors pop and contrast against one another like an ethereal dream — the soot-blacks of Ava’s hair and the dog’s fur (which is borderline featureless) crash into the saturated beaches of France. There’s an excessive amount of profound sensory moments like this in Ava, and not a single one is vapid aestheticisation for the sake of it — it’s all in a perfect symbiosis with the rest of the film. This symbiosis is masterful, and Mysius tells the horror story that is losing one’s sight with startling precision. Sight (or the eye) has always been inextricably linked to the medium of film (Buñuel’s Un Chien Andalou, for one), and Ava’s brilliant conception of this transcends the narrative, as it can also be read as a metatextual commentary on analogue film. It doesn’t come as a surprise to see that cinematographer, Paul Guilhaume, is also credited as co-writer on the film. Ava is a film of revelations, and while there are many single moments that will stick with me for a while, the biggest revelations here are Léa Mysius and newcomer Noée Abita. These are two voices that will make themselves heard, hopefully for years to come.