With the third and penultimate movie in The Hunger Games franchise, director Francis Lawrence does the source material justice. Here he tries his damnedest to make a dark, dismal and bold depiction of a dystopian future, where the suppressed public strikes back at the forces holding them down.

Since its very inception at the movie theatre in 2012, people have compared the Hunger Games franchise to other movies based on young-adult novels like; Harry Potter and Twilight, and in more recent years, Divergent and The Host. While all of these are certainly different in their own regard, they share a common target audience… teens. This is not necessarily bad in and of itself, but can – and have – become stale for a wider audience. Therefore its like a breath of fresh air to witness the lack of conformity within Francis Lawrence’ latest directorial work, as he seems to embrace the darkness of the source material. The depiction of violence is still mild, but gore and violence should never be the common denominator in which we measure maturity in fictional work. Lawrence shows us the ruins of civilian life, left behind by the Capitols fire bombs and oppression, and takes us close to the characters who’s still alive, because they are the ones with the most pain, those who have lost everything. 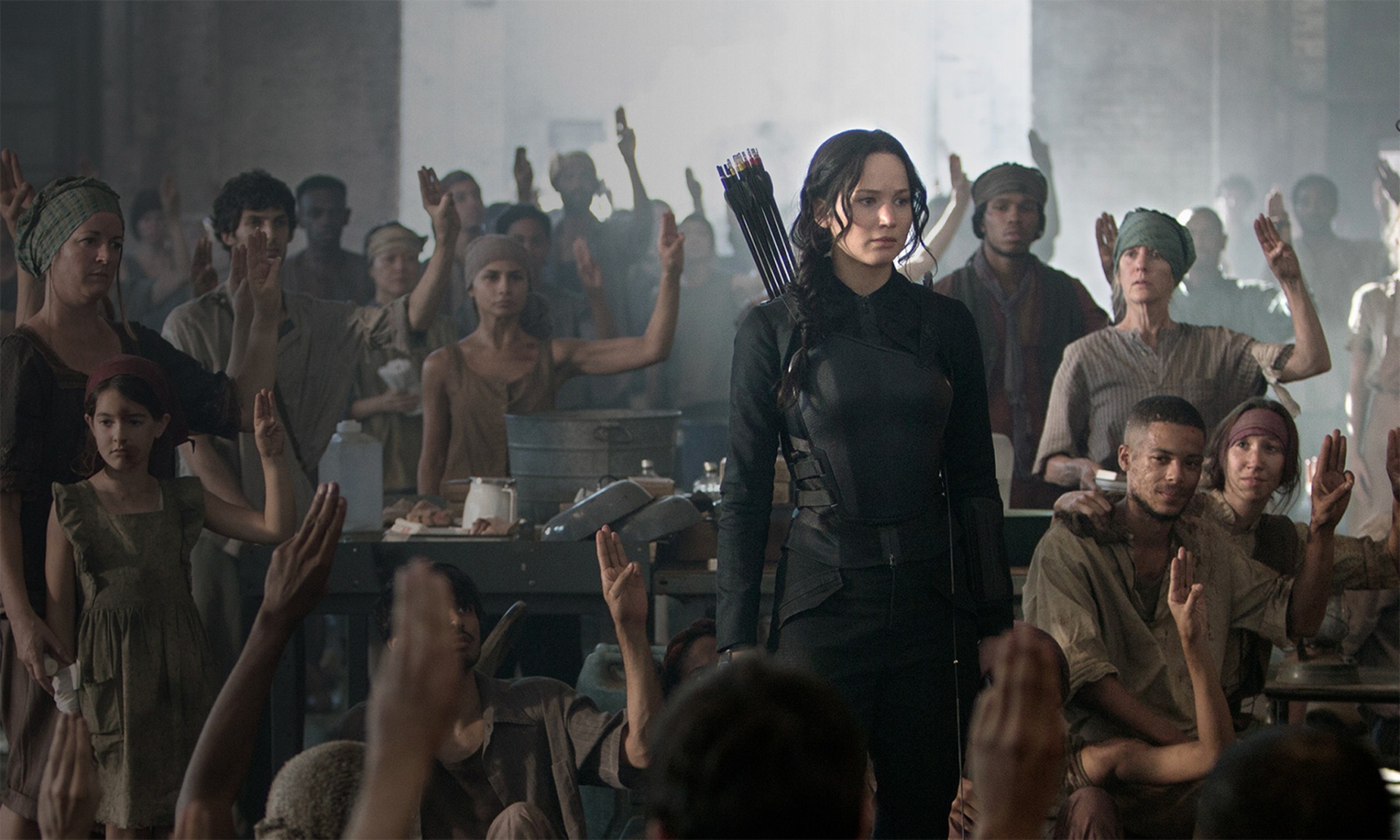 Like you probably would know if you’re reading this, Katniss (Jennifer Lawrence) and Peeta (Josh Hutcherson), and quite a few others, made it out of the arena for their second time at the end of Catching Fire. Katniss, Finnick (Sam Claflin) and Beetee (Jeffrey Wright) were rescued by the rebel group, and are now hiding in the ruins of District 13. Peeta, however, has been captured by the Capitol, and appears on nationwide broadcasts to beg the rebells to lay down their weapons so the senseless killing can stop on both sides. It becomes a propaganda circus, as President Coin of District 13, pushes Katniss to inhabit to role she is supposed to play in this revolution.  The symbol of the uprising. The mockingjay.

The narrative and overall theme of Suzanne Collins literary work has always been more mature than its competitors mentioned above. The dystopian future in which the story takes place does not only present associations to George Orwell’s 1984, and the rise and fall of the Roman Empire, but also works as a looking glass onto our current politics on climate change. Enter the mix in Mockingjay – Part 1, is propaganda. While propaganda has always had its place in the movies and books, it has never been explicably used by both sides to gain followers to their cause. It now, more than ever before, becomes a statement on the modern media. I will not go on a rant about modern mainstream media, but the movie does present a blank canvas in which it paints a few broad strokes about our world, and lets us fill in the gaps with discussions and debates.

Yet of course, the love triangle between Katniss, Peeta and Gale (Liam Hemsworth) is still to be found. Toned down a lot compared to the previous movies, it feels much more sentimental and effective when it first takes center stage in this one. Even so, it feels like the most unnecessary plot element in the story. Shoehorned in to attract a younger audience, it – the love triangle as a narrative device – never does much for the story or the characters. This is not to say the relationship between Katniss and Peeta, and Katniss and Gale is bad – it certainly isn’t – but the way in which both the movies and the books plays it out like any other love triangle seems forced and at times ridiculous in the otherwise mature and consistent story. But hey, I’m not a teenage/young-adult female rebel, so maybe love triangles comes with the territory. 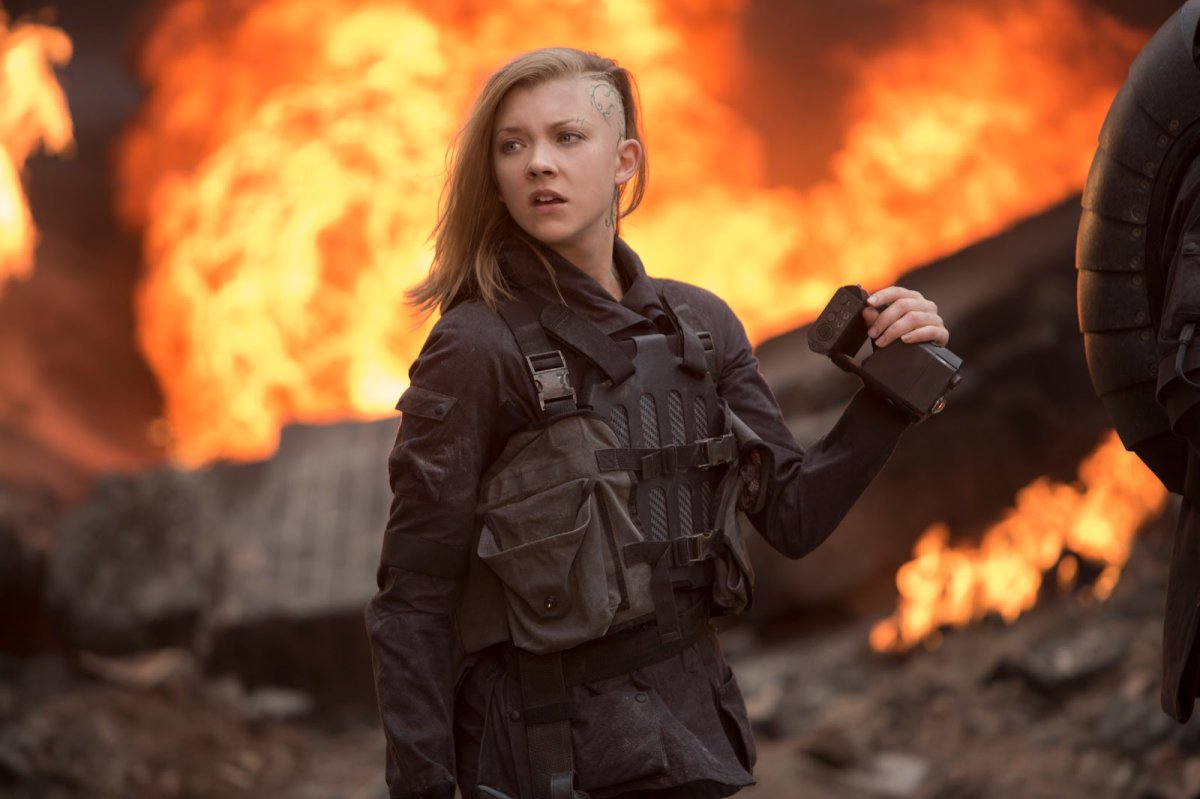 Like so many other recent block buster movies tied to books, this is split in two. I’ve yet to see a movie do this directorial (and, let’s be honest, financial) decision justice, but Mockingjay – Part 1 comes very close. It ends on a definite high note, but sadly suffers from the same problem we saw in Catching Fire; It feels like a commercial  for the next movie. It does succeed in this regard, so one could argue it does what it set out to do.

Finally, a few words needs to be said about the performances from the many actors. Jennifer Lawrence is neither exceptionally good, or bad. She delivers on the same page as she’s done in her previous encounters with Katniss, but it’s still one of her simplest performances to date. The same goes for Liam Hemsworth, Josh Hutcherson – who does well with the little screen time he gets – and Woody Harrelson as Haymitch Abernathy. There are certain newcomers worth a mention, where both Natalie Dormer and Julianne Moore impress as per usual, but only Dormer, Elizabeth Banks and Philip Seymour Hoffman really stand out among the crowd. It’s difficult to watch the scenes with Hoffman, but luckily, he performs on a high note and the movie does him justice. (You will forever be in our memory Mr. Hoffman)

The Hunger Games: Mockingjay – Part 1 is without a doubt the best book in the series, and one could argue the same goes for the movies. However, it’s still early to make such a comment, but Francis Lawrence deserves a lot of credit for this adaptation, and he succeeded in putting Part 2 on my “to watch list” already.